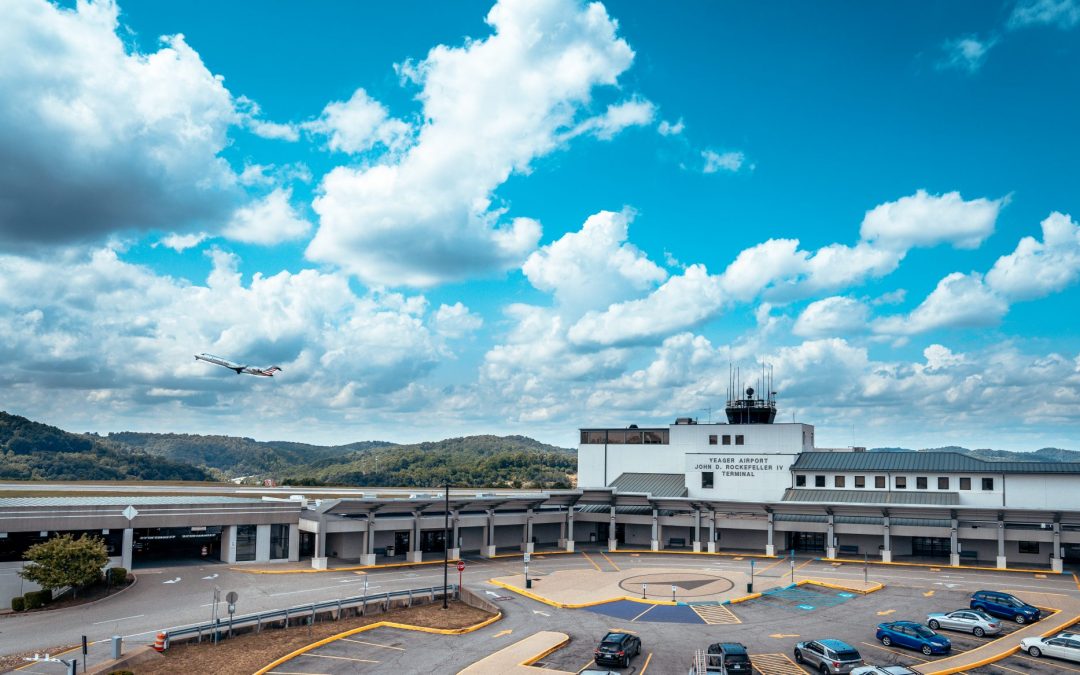 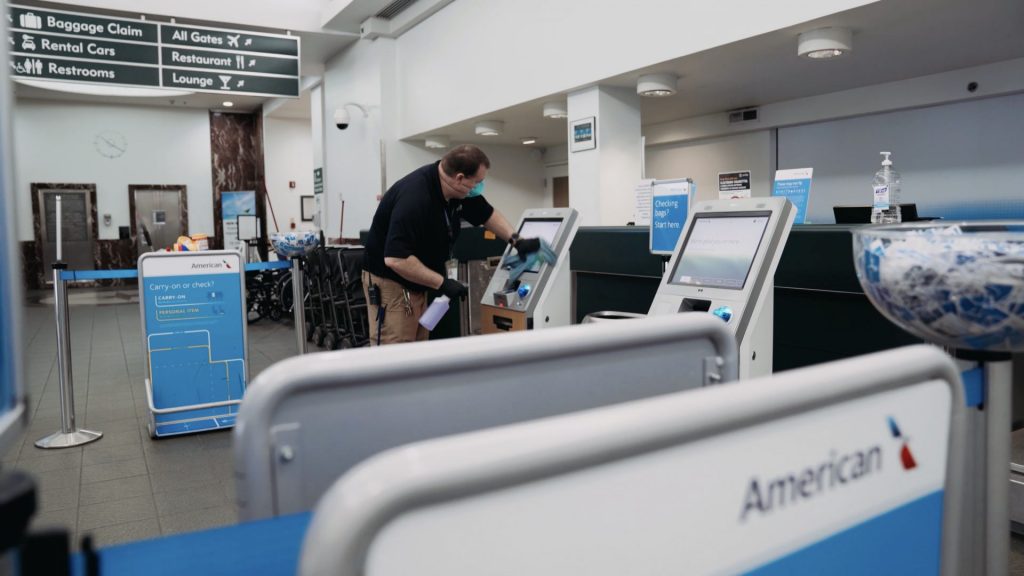 Businesses shut down, finding a can of Lysol wipes meant you won the lottery, and the traveling came to a halt. What started as a two-week quarantine went on for months. The airport felt like a ghost town, and it seemed like there was no end in sight.

On The Road To Recovery

Fast forward to today, and we are on the road to recovery. Masks are commonplace, social distancing is the new norm, and the vaccines are continuing to roll out across the country. The travel industry is making a comeback.

West Virginians do not give up, and neither does Yeager Airport. Even with passenger numbers down near single digits in 2020, we moved forward with many different construction and improvement projects. Working with our forward thinking board of members, we decided the airport would not need to play catch-up when passengers came back.

Marshall University Bill Noe Flight School. If you have been to the airport viewing area recently, you can see just how fast this building is going up. Both the school building and hangar are on schedule to be ready for students in August 2021. Before the pandemic, there was already a pilot shortage, and with travel ramping back up over the next several years, the demand for pilots is only going to grow. I am excited that Yeager Airport, partnering with Marshall University, will be putting pilots into the air travel continue to rise. 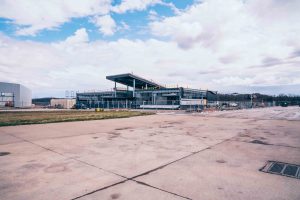 Post-Security Restaurant. Our post-security gift shop and restaurant, The Junction, got a much-needed facelift in 2020. It now looks like something you would see in a hub airport. We are extremely proud of the experience we can now offer passengers while waiting for their flights. 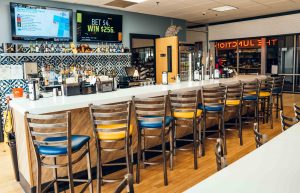 The Junction is located in Gate B, just past the security checkpoint.

Planning for the future. With the addition of the flight school, an increase in military presence at CRW, and traveling numbers bouncing back, we are designing future projects. In the next couple of years, we plan on remodeling the restrooms in the main terminal, replacing the public address system and signage, and replace a passenger boarding bridge. We are also planning more aircraft parking aprons and hangars.

Customs Building. The ground has been broken, and footers have been poured for the United States Customs and Border Protection Facility. Once this facility is built, it will allow international general aviation passengers to stop at Yeager Airport to clear customs before proceeding to their final destination. This will be another great way to diversify revenue streams at CRW.

There are several projects in the pipeline at CRW, including bathroom renovations and upgrading the pre-security restaurant and checkpoint area.

Changing The Way We Clean

The pandemic also provided us an opportunity to look at how we clean the airport. Our goal was always to provide the cleanest facilities possible for our passengers, and I believe we did that pre-pandemic. However, we have now gone a step further. All of the air ducts at the airport have been professionally cleaned, all of the air conditioning vents have been replaced, and UV-C lights were placed in vents to help clean and filter the air.

Our cleaning staff, who have been tremendous during COVID-19, put together a schedule to ensure high touch point areas were being cleaned at least four times a day. In some cases, like the TSA Checkpoint, we had cleaning personnel dedicated to only cleaning that area. 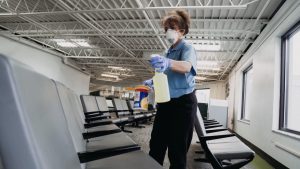 Support Services member cleaning chairs after a flight takes off.

2020 was a rough year for everyone. April 15th, 2020, 15 people flew out of Yeager Airport. 15 passengers was a tough pill to swallow. But our confidence and dedicated team of employees never wavered. We weathered the storm, and now I believe we have come through the other side. We are not back to pre-pandemic numbers. That will take some time, but we are on the right track. West Virginians don’t quit, and neither does Yeager Airport. 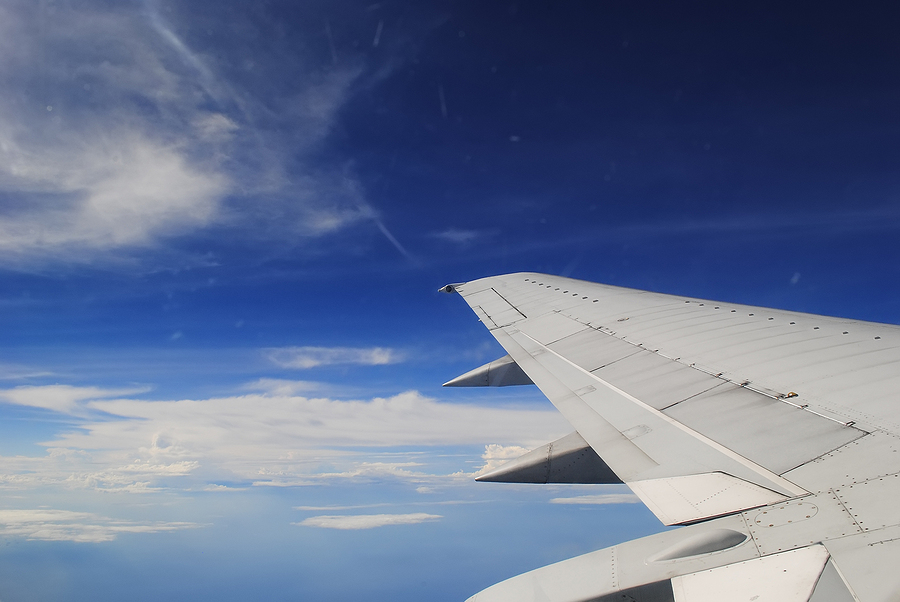 The Future is Bright for Aviation at Yeager Airport

The Past, Present, and Future of Aviation

In the 1800s, the interest in “flying machines” really began taking off. That century was the first time people had an understanding of what it would take for people to fly. Still, by the end of the 1800s, no one was able to build a successful airplane.

It did not take long for the hard work of aeronautical advancement in the 1800s to pay off. In December 1903, the Wright Brothers made history. Wilbur and Orville Wright made four short flights in Kitty Hawk, North Carolina, marking the dawn of a new age.

Airplanes proved their worth during World War I. In 1921 the Army Air Service brought dozens of aircraft to a small grass airfield in Kanawha City, West Virginia later named Wertz Field. Although Wertz Field wasn’t an ideal location for passenger traffic it continued to operate until 1942. On November 3, 1947, Kanawha Airport now Yeager Airport was opened, and the first commercial airline flights began operating a month later on December 1, 1947.

Today air travel makes it possible to get anywhere in the world in a short amount of time. Air travel is so popular, it is estimated that commercial airlines will need eighty-seven new pilots every day to keep up with the demand for flying.

Yeager Airport and Marshall University are going to be part of the solution to the potential commercial pilot shortage. In the fall of 2021, the Marshall University Bill Noe Flight School will open its (hangar) doors. The flight school will offer a Commercial Pilot: Fixed-Wing Bachelor of Science degree and an Aviation Maintenance AAS which will house around fifty students each year. Those students will get a first-class flight school education and help meet the nation’s projected need for commercial pilots over the next two decades. 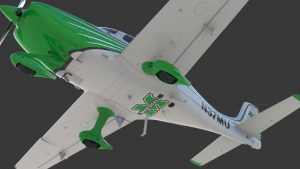 The development of aviation programs with Marshall University is a tremendous opportunity for the airport and for the whole regional economy. Yeager Airport continues to work tirelessly toward the bigger strategic vision of Yeager Airport: to help West Virginia by becoming the most important economic engine for the State through advances in aviation and education. Whether that means giving you a first-class airport, bringing more aviation jobs to West Virginia, or investing in the future of air travel. The possibilities are endless in air travel, and Yeager Airport intends to be at the forefront of those possibilities.