West Virginia International Yeager Airport (CRW) has a statewide economic impact of 225-million dollars, according to the Aviation Economic Impact Study (WVAEIS) released by the West Virginia Aeronautics Commission. The study, which is done every five years, was started in January of 2020 using 2019 numbers.

“We want CRW to be the most important economic engine in West Virginia,” said Airport Director and CEO Nick Keller. “225 million is a great number, but our goal now is to continue to grow that number each year.”

The study defines economic impact as the money spent to operate the airport, sales of airport tenants, budget expenditures by public agencies located on airports, capital expenditures, visitor spending, and sales by air cargo services. The WVAEIS says CRW is responsible for nearly 3,000 jobs. Those jobs are made up by people who work directly for the airport, as well as people who work for airport tenants.

“West Virginia International Yeager Airport continues to identify innovative means of diversifying revenue generation,” said Director of the West Virginia Aeronautics Commission Sean Hill. “I am excited to see how the airport grows from the baseline established in our impact study.”

CRW brought in more than 87,500 visitors, according to the study. Those visitors spent a little more than 33.7 million dollars while they were in West Virginia. The WVAEIS details the 1.6 billion dollar economic impact of aviation in West Virginia. Airports serve as a catalyst for people to conducts business, serve clients, ship cargo, and see the world. Having a well maintained and diverse aviation system supports a robust economy. 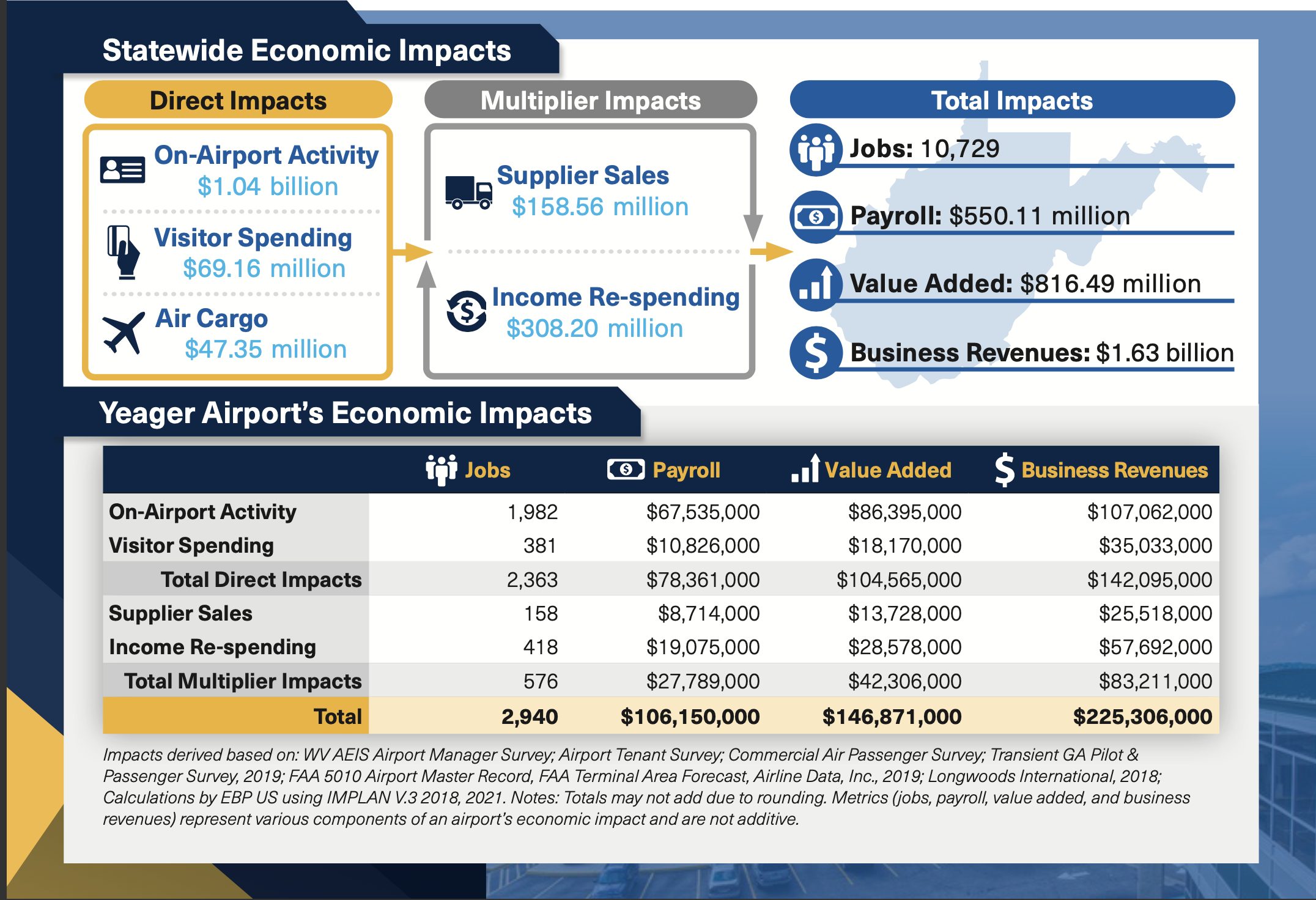 The 2020 West Virginia Aviation Economic Impact Study was conducted using 2019 data to quantify the economic contributions of West Virginia’s airport system to the state’s economy. The 24 publicly owned airports in the state support the transportation of people, goods, and services to, from, and within the Mountain State. This generates quantitive economic value in the form of jobs, payroll, value added, and business revenues, but airports also enhance the quality of life for West Virginias by supporting air ambulance operations, remote access and evacuation, just in time deliveries of freights, aerial firefighting, aviation career opportunities, and much more.

Economic benefits are generated by on-airport activities including employment (administration and tenants) and capital improvements (construction). Economic impacts are also generated off-airport when money is spent by out-of-state visitors traveling to West Virginia via the state’s seven commercial service airports and 17 GA airports, and when air cargo transported via the state’s airports supports the operation of off-airport businesses.

The initial economic activity, known as direct impacts, generates additional impacts as money flows through the economy. These “multiplier” effects result when a portion of direct business revenues are used to purchase goods and services in West Virginia and payroll us re-spent within the state. In addition, direct impacts for airport activities and visitor spending also generates $75.5 million in tax impacts annually.